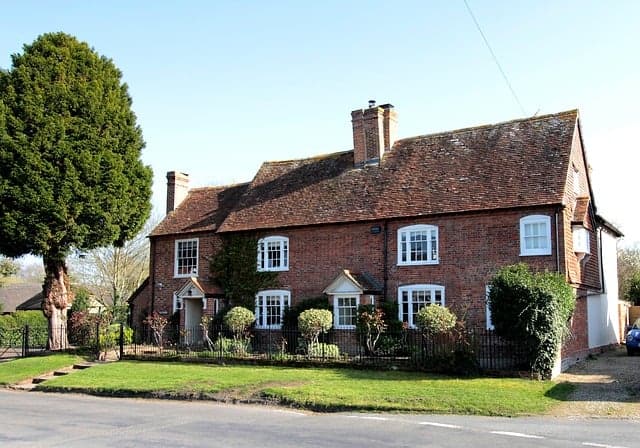 “I say, the Bennet’s seem to have visitors.” Mr. Bingley addressed his comment to Mr. Darcy, currently riding his big dappled gray next to him on the lane towards Longbourn.  Mr. Darcy spied the horse cart near the front of the home. He shook his head.

“I daresay, not visitors.  That is a horse cart if I am not mistaken. Have you had a letter from Miss Bennet today stating if anyone has been taken ill?” Mr. Bingley pulled back on his chestnut.

“I have not. Do you think we should turn around? Could it be catching?” Mr. Darcy stopped his horse, staring at Longbourn. His zeal to see Miss Elizabeth was an overriding factor in this visit, yet he could not ignore the wishes of its inhabitants. Especially if that was the apothecary’s horse cart.

“Perhaps it would be better if we returned to Netherfield. We could send a message regarding our welcome for dinner.” Mr. Darcy and Mr. Bingley both started wide turns, directing their horses to back whence they came. Their maneuvers were halted by the front door opening and a servant running out.

“Sirs! Please come in. The Bennet’s have been expecting you, Mr. Bingley.” The maid curtsied poorly, but that was to be excused after her trot down the lane.

“Is anything the matter? I notice the horse cart off to the side. Is that not the apothecary’s cart?”

“Oh yes sirs but,” the maid dug her fingers into the folds of her dress, “it is nothing though. Mrs. Bennet assures everything is quite alright. Please do come in.” The made curtsied again and walked back to the house.

Mr. Darcy and Mr. Bingley looked askance at each other. “How unusual. Do you think it is safe for us to go in?” Mr. Darcy wondered himself, as he was well acquainted with the histrionics and unsound reasoning of Mrs. Bennet.

“Let us make our way inside. I am sure if there is any danger, Mr. Bennet would have done the gentlemanly thing to write us to stay away.”

“Are you sure? They did not know we were coming today?” Mr. Darcy gave a small smile as he looked at Mr. Bingley.

“Charles, you are engaged to their eldest, Miss Bennet. You are to be expected daily.” Mr. Bingley laughed it off with a shrug.

Mr. Darcy eyed Longbourn as they rode closer. He doubted any serious illness had befallen anyone in the Bennet family. He was so desirous to see Miss Elizabeth, that he was willing to override his common sense in this matter. However, it would not do to come down with an illness either.

“Let us go in. We can question a servant if we are not getting a straight answer.” Mr. Bingley nodded and they both took off trotting down the rest of the lane.

“Mr. Bingley and Mr. Darcy.” The maid announced them as they walked into the drawing room. Mr. Darcy glanced quickly about, but did not see Miss Elizabeth. He furrowed his brows, as it would be very unlikely that Miss Elizabeth would not be included in this visit. Unless it was she that was ill.

“You are very, very welcome. It is so good to see you again Mr. Bingley. And I suppose your friend is welcome too.” Mr. Darcy ignored Mrs. Bennet, his skin crawling with the desire to be far away from her. It was unfortunate and likewise unbelievable that Mr. and Mrs. Bennet had sired such an intelligent and sensible woman as Miss Elizabeth.

“Thank you Mrs. Bennet. I say how is your health?” Mr. Bingley finished the sentence with a glance at Mr. Darcy. Mr. Darcy refrained from rolling his eyes at his friend. Subtlety with not one of Mr. Bingley’s stronger traits. And to think Mr. Bingley had once dreamed of being a spy.

“Oh, we are all of fine health. Yes, indeed we are. As I am fond of telling Mr. Bennet, we have such good breeding with our daughters. The rest of the village may come down with a cold, but we are never ill.” Mr. Darcy could not help but raise his eyebrows. If that was not the apothecary’s horse cart out front, he was a dunderhead.

Mr. Darcy could not keep silent any longer. His concern for the absence of Miss Elizabeth was overriding his repulsion of actually addressing Mrs. Bennet. “Mrs. Bennet, I have noticed that Miss Elizabeth is absent. Is she in good health?”

He had forced himself to look at Mrs. Bennet, which meant he had a direct view of Mrs. Bennet glance down guiltily. “It is just a trifling matter. We are all of such robust health.” Here she turned to direct her words to Mr. Bingley. “Why my dear Jane, she is so healthy. She could walk for miles upon miles every day. Perhaps you would like a walk around our grounds? Be assured that you may come here shoot anytime you wish. We have many pheasants here, as well as grouse and quail for you to shoot anytime you wish.”

Mr. Darcy noticed that Mrs. Bennet had not directly answered his question. He decided that was probably all he was going to get out of her. It would be very rude, and bad manners for him to do what he was thinking of, but his concern for Miss Elizabeth and the uncouth manners of Mrs. Bennet relieved his mind of his upcoming action.

“If you will pardon me Madam, I must check on my horse. He had a stone in his shoe earlier.” He bowed and quickly left the room. Mr. Bingley hopefully could carry the story without giving anything away.

Outside the drawing room he did not see anyone. The upstairs bedrooms would be on the second floor.  But how to get up there and check on Miss Elizabeth without being seen? Mr. Darcy turned towards the interior of the house. There was a better chance of finding a servant the closer he was to the kitchen. As luck would have it, he did not have far to go before the very same servant that bade them enter Longbourn, came into view.

“Could you tell me the status of Miss Elizabeth’s health? I fear I have not received much information from Mrs. Bennet.” The servant, holding a pile of freshly ironed linens blushed and curtsied.

“I am not sure I should be saying anything, Sir.” The loyalty of the servant to the family was admirable. Or she was waiting for coin to loosen her tongue. Mr. Darcy reached into his pocket and pulled out a few coins.

“I would be much obliged if you could give me a truthful account of Miss Elizabeth’s health. You see, she is much in favor with me.” The servant readily took the coins.

“I hate to betray confidences, but we all are quite concerned. The apothecary was only called today. Miss Elizabeth was taken ill quite suddenly yesterday with great pains. We have all been changing the sheets and emptying the chamber pots like clockwork through the night and day. She looks like the sheet she lies upon.” Mr. Darcy was beyond alarmed. This was not some trifling matter as Mrs. Bennet had uttered. This was a serious illness.

He knew better than to take someone’s word for it though. The accounts from Mrs. Bennet and the servant were of such opposing extremes, that he felt they were unreliable.  Thought he was leaning towards the servant as being the more truthful of the two.  “I would be much obliged if you could keep my confidence in this matter.  I wonder if everything is being done for Miss Elizabeth. You say the apothecary was called?”

The maid nodded her head. “And he was just called now?”

She nodded her head again. “Yet the pains and digestive ailment started yesterday?”

The maid nodded her head yet again. He knew he could not count upon any reasonable action from Mrs. Bennet, but for Mr. Bennet to not have done anything for Miss Elizabeth until today quite bothered him.

“I fear I cannot rely upon the account Mrs. Bennet gave me regarding Miss Elizabeth’s health. I would be much obliged if you could direct me to her bedchamber so that I may ascertain if the apothecary is treating her correctly.” He knew what he was doing was against all rules and decorum of society, let alone a gentleman. But in this matter, the health of his beloved Miss Elizabeth, he was not going to follow the rules.

The servant opened her mouth as if to protest. Mr. Darcy held up a hand. “I understand your concerns, but I will not enter the bedchamber. Hurry, I fear time is of the essence.”

“Oh sir, I cannot do that!” Mr. Darcy faced a good servant, surprising in this household run by Mrs. Bennet. He needed to see Miss Elizabeth, though. The urgency ran through his body, his fear for her health the only other emotion outstripping it. How could he convince this staunch servant to let him upstairs?

“I should like to take a tour of the house. I understand you have fresh linens to put away?” The maid nodded her head. “Excellent. Let me follow you and see where the linen closet is situated.” The maid looked confused but slowly her countenance changed as it dawned on her what Mr. Darcy had planned. She blanched and her obvious fear gave Mr. Darcy some pause in the scheme he had planned.

“Do not worry. If anything should befall you due to this, come to Netherfield and seek out Mr. Darcy. I will employ you.” The fear left the servant’s face as he knew it would.

She walked a few steps towards the front door then opened a door in the hallway. It had concealed a very narrow staircase, the servant’s stairs. Mr. Darcy followed the servant up to the second floor. The servant paused at the top, then opened the door. She looked both ways then glanced back at Mr. Darcy nodding her head. She exited the staircase continuing on down the hallway. Mr. Darcy followed her realizing it was not going to be difficult to find Miss Elizabeth’s room after all. He would just follow the screams.