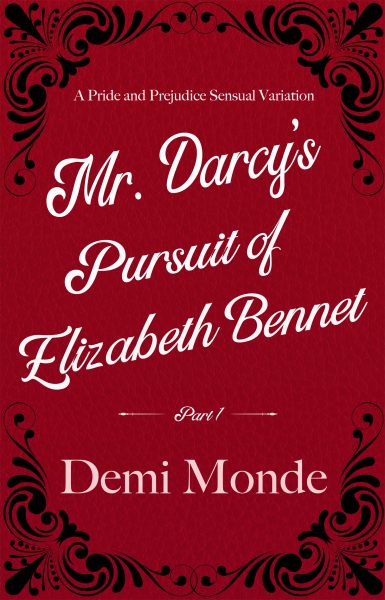 All Miss Elizabeth has left is her pride…
After Mr. Bennet’s death, Elizabeth Bennet is cast out of Longbourn. Escaping a one way trip to a brothel, Elizabeth finds work at an inn, a new low.
After Mr. Darcy’s proposal to Elizabeth at Hunsford is rejected, he still longs for her. Stumbling upon her at a roadside inn, he offers her a life of luxury… as his mistress.
Mr. Darcy will stop at nothing to make Elizabeth his own. But will her pride keep them apart?
This sensual Pride and Prejudice variation novella is the first part of a four part series featuring a slow burn, enemies to lovers, seduction and chase of Elizabeth Bennet that ends with them married happily ever after.

Read it now on Amazon or Kindle Unlimited

Mr. Darcy hung onto the strap as the carriage completed a swift and sharp right turn into the small posting inn’s yard. His driver shouted at the horses and worked to slow their breakneck speed.

Something must have gone wrong for the carriage to be moving this fast into the inn’s yard. He would not pound on the ceiling and ask what the devil was happening, even though the jostling threw him against one side as the carriage turned another sharp corner. He had never experienced such horrible driving in his entire life. Thankfully, he was in his well-appointed and cushioned carriage.

They finally slowed down. Mr. Darcy removed his hand from the ceiling strap and looked out the window. There were traveling behind the posting inn and turning to the yard in front.

He had never been to this inn before on his annual trip to visit his aunt at Rosings Park. He had to take a different route due to the flooding and washed-out roads. It was a route that must not be used by the mail coaches, as the roads were in horrific condition. The innkeeper had to be the only one happy at the flooding, for this out-of-the-way inn’s posting area was a crush of carriages and horses.

Mr. Darcy picked up his beaver hat from the floor, opened the door, and jumped down before the tiger could pull the steps down. He found the tiger at the head of one of the stallions, soothing nervous horses.

He looked up at the driver and saw him shaking while still holding the. “Mr. Balfour,” yelled Mr. Darcy, “what the deuce happened with that driving?”

Mr. Balfour looked down, his face as white as a sheet. “I beg your pardon, sir, but the brakes did not work. Samson had the bit in his mouth again and did not want to stop galloping.”

Mr. Darcy sighed and frowned at the tall bay horse, Samson. He had purchased that stallion several months ago for what he thought was an amazingly good price. Now he knew why Blenheim Palace sold him that stallion. He was too smart by half and nearly uncontrollable. Mr. Darcy had given up trying to ride him and had decided that hitching Samson to the carriage would improve his temperament.

That had backfired rather spectacularly.

On the way to Rosings, Samson must have figured out that if he worked the bit between his teeth, he could run without being stopped. Mr. Darcy did not want to give up the horse, as he was a fine animal with a perfect conformation. Perhaps he should race him? Or breed him to local racing mares?

“Once you have the horses settled, you may take turns coming into the inn for refreshment.

The drivers and tigers normally did not come in to partake of refreshment, but they needed it after dealing with Samson. That would also allow him time to recover from that jostling carriage ride. Mr. Darcy rubbed his lower back as he walked to the inn’s front door. If he had to ride on one more road like that, he would need to see the physician for a broken back. No matter how well-sprung his carriage was.

Mr. Darcy opened the inn’s door and stood to let his vision adjust to the dim interior. The room was packed, as he knew it would be. He did not see an open chair anywhere. He did not see a barmaid or a waitress either.

Mr. Darcy rubbed his face with his hands. This was not at all how he had envisioned this trip. It had not gone how he had thought it would.

At Rosings Park, at the parsonage, everywhere he went, he remembered Elizabeth Bennet.

He scoffed and looked up at the dingy wooden beams on the ceiling. She was still the most fascinating woman he had ever met. But now that he knew how little regard she had for him, he needed to relinquish his ridiculous daydream that he would see her somewhere and she would profess her love. He was sure Elizabeth was married now, and he completely ignored the pain in his upper chest as he thought that.

He surveyed the dining room, still not seeing any barmaid. A person that had to be the innkeeper, a short round man with an apron who looked harried out of his wits, was rushing through the room.

“Hey there,” Mr. Darcy called, “do you have someone that could bring me a drink?”

Darcy scowled, for he did not like how harshly he had spoken. Elizabeth Bennet’s parting words had never stopped haunting him: “Had you behaved in a more gentlemanlike manner.”

The innkeeper quickly squeezed through the crush and bowed. “I do apologize, sir! As you can see, with the flooding we have become the main inn around these parts. I do not know where Sally has gone, but I will get Lizzy, our upstairs maid, to help.”

“I do not care who serves me as long as I receive something. I am parched.”

Damn and blast, he sounded arrogant again, just as Elizabeth, known to her family and friends as Lizzy, had accused him of being nearly exactly a year ago. Not that he had been counting.

Mr. Darcy crossed his arms and refused to think about her anymore. He looked at the full tables near him. Suddenly, the occupants blanched and stood quickly, leaving with nervous glances in his direction. He should have felt guilty for his scowl causing people to leave, but he was in too bad of a mood to do anything about it.

He walked over and sat down at the table closest to the fireplace. He faced the fire so he could watch the flames dance. That would help him get his thoughts and himself under control.

Then he heard a voice he had not heard for almost a year, exactly.

He stilled where he sat. His heart sped but he did not turn his head to look for the owner of that voice. He knew hearing Elizabeth Bennet’s voice was not a good development. He would stare at the fire and pretend nothing was amiss.

Damn, his father and the Matlocks had always thought the de Bourgh’s eldest son’s madness came from Sir Lewis, but his hearing Elizabeth Bennet’s voice now put that in doubt. Perhaps the madness was in his mother’s line, as Lady Catherine was his mother’s sister.

He groaned and lowered his head into his hands. This was just his luck: this trip with rotten roads, a miserable visit to Rosings Park with memories of Elizabeth everywhere, and now he had gone mad and was hearing her voice. God help him if he started to see her.

“And you sir,” said Elizabeth’s voice, “what would you like?”

He kept his head in his hands as he realized his sister would be at Pemberley by herself if he were locked up in Bedlam. Perhaps Lady Catherine would take Georgiana under her wing and split her time between both estates?

Now Elizabeth’s voice was even closer. How did one’s mind even do that? How could it take the voice of that woman, which had haunted him for a year, and make it say things he had never thought?

Mr. Darcy sat back in his chair and glanced up in the direction of Elizabeth’s voice to prove to himself there was no one there.

His heart stopped. He swallowed. He would no doubt be incarcerated, for he was now seeing a vision of Elizabeth Bennet.

He drank in the apparition his mind created, which was odd because she was not dressed as he had remembered her, and she stared at him in horror.

The phantom backed away, pale as a sheet with a hand covering her mouth. She turned and quickly walked through the crowded tables towards the bar.

He followed her with his eyes and then stood, not caring if the entire room’s occupants thought he was mad, for he was surely so. He watched the Elizabeth hallucination until an arm reached out from a table’s occupant, pulling at her. The manifestation stopped and turned back, talking to the person.

By Jove! She was not a vision at all? She was real? What was she doing here at this run-down inn off the main roads? And working as a maid!

Mr. Darcy walked towards her as another hand reached out and squeezed her derriere.

“Oh!” Elizabeth swung her arm back and smacked the man’s hand. “I am not that kind of woman, and I expect you to keep your hands to yourself!” She stormed off through a door which most likely led into the kitchen.

Mr. Darcy followed her, pausing only to scowl at that table of men who were discussing “teaching that doxy” to show “proper manners to her betters.” He glared at each of them, his look silencing the entire table.

He continued towards the door Elizabeth disappeared behind with a new worry. Perhaps she was not just a maid at this inn. It was bad enough that she was working for a living as a maid when she could have been a well-placed governess or at the least a lady’s companion.

Mr. Darcy pushed those thoughts out of his head, determined to not think of it, and walked through the door.

It was the kitchen, and Elizabeth sat on a stool, bent over, sobbing.

The cook was speaking to Elizabeth while ladling stew from the big pot over the fire. “I do not know what you are crying about, heaving those great big sobs, but you have to go back out there. We have far too many patrons for you to be taking a break. I do not care if they did grab your commodities. You have to earn your keep.”

Continuing, the woman said, “I do not know where that good-for-nothing Sally has gone. I told her not to ply her trade when we had such a crush as this, but she has probably taken a gent behind the stable again. Lord knows we needs to—”

The cook turned and finally noticed him. She stilled, mouth agape, then tried to curtsy while simultaneously holding a ladle filled with stew. “Pardon me, sir. We shall have what you ordered right out, sir.”

The cook walked over with her hand out to either shake or smack Elizabeth, but at that moment, the distressed woman herself turned on the stool and faced Mr. Darcy. Even with tangled, messy hair, well-worn threadbare clothes, it was most definitely Elizabeth Bennet.