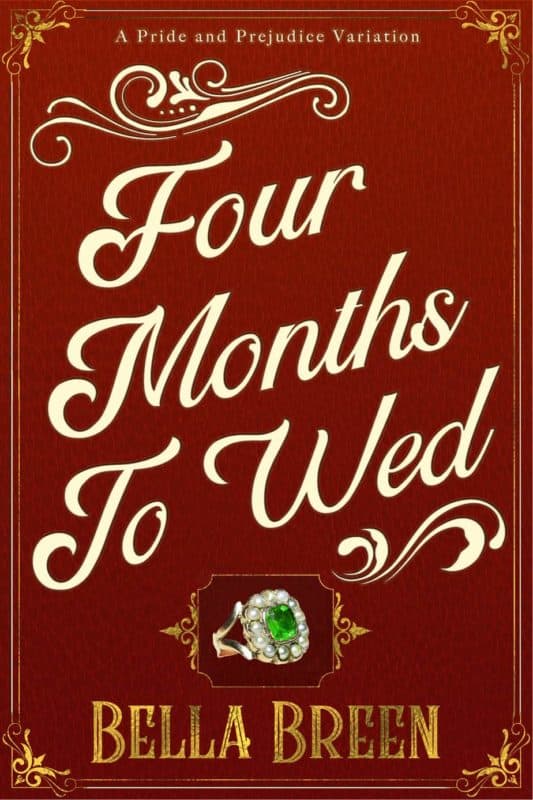 An epidemic. A forced marriage. Can love bloom?

Miss Elizabeth Bennet’s secret beau is in London when the epidemic strikes, a rare and deadly form of smallpox. Now, due to a new law, all unmarried men and women of age must wed by the end of the year. Elizabeth, in secret mourning, now must find a husband, but can any gentleman find a place in her broken heart?

When Mr. Fitzwilliam Darcy joins his friend at Netherfield to find a wife, but her family is beneath him, so he sets his sights on another. But returning to Netherfield after attending his aunt, he finds his careful plans ruined.

And then the drama starts…

Can Mr. Darcy make amends for his insulting Elizabeth at the Meryton assembly? Will Elizabeth recover from an unexpected and heartbreaking surprise? Dare Mr. Darcy offer for the woman he desires?

"Feels authentic in dialogue to the original “Pride and Prejudice” story. Retains the feel and nuances of the original story with same characters under some different circumstances. If you’ve ever wondered what was really going through Darcy’s mind when he stared at the lovely Miss Bennett - you’ll enjoy this short, romantic and spicy tale. To be continued in part 4 and I look forward to reading more!"
007fleurdelisBookbub
"I devoured this book all in one night, which for me is the litmus test of truly good JAFF. The idea was very original, the writing was well done and engaging, and the pacing kept me turning page after page."
JCousteau
"Once I started reading it, I couldn't put it down. This is a truly original, unique, engaging and well-written story! "
Lisa Hatfield
"I will admit I had trouble putting this one down! This is a very unique premise. The twists and turns kept me on the edge of my seat. "
Lynn Char
"The plot grabbed my attention and held it until the very end. Engaging characters, and a unique plot make this a must read! I HIGHLY recommend this lovely novel!!!"
L. Hatfield
Previous
Next

When the first person fell to the ground, Mr. Darcy had just finished a solitary ride across the countryside that ended in Lambton. He had planned to stop at the pub and have a drink, one of his ways of knowing what was going on in his county. But when the second person fell down, he turned his steed around and kicked him into a gallop towards Pemberley.

He thought hard on the ride back to his home. Both people had bright red rashes. There had been no sign or sound of Napoleon’s forces, and he would not believe the French to be the source of the illness this far inland. Besides, a malady would be hard to use in an attack. That left a fast sickness, one that showed no symptoms until the person was well and truly ill.

His heart sped up as he thought of his sister, Georgiana, who loved to be out in the flower gardens. He would force everyone inside Pemberley and not let them out. Deliveries would be made by doorsteps without anyone coming into contact with someone from the outside. He would have to let his sister’s masters leave; they had traveled from London to teach Georgiana in Spanish and oil painting for three months.

Mr. Darcy pulled back on the reins to slow his horse to a canter. Should he even go to Pemberley? Would he infect everyone there? He did not know what else came with the illness after the rash and fainting, but if death was a possibility, he would not put his sister at risk. Nor the faithful servants of Pemberley.

He entered the stable yard, pulling his horse back from approaching a stable hand as they usually did. “Get away! I may be ill with a disease that has afflicted several in Lambton just now!”

The stable hands stood and stared, unsure of what to do or what to make of what their master said.

“After you take care of my horse, wash your hands and faces thoroughly. I do not want that illness here.”

Mr. Darcy spied a footman having a break in the yard. “Mr. Allen, inform Mrs. Reynolds that I will be staying in the old gamekeeper’s lodge until I either contract the illness and it passes or a sennight. Have food delivered by hamper left outside.”

He dismounted, then quickly backed away from everyone, pulled his scarf over his nose and mouth, and walked out of the stable yard in the direction of the old lodge. Shouting had him turn around to see Mrs. Reynolds trying to get his attention.

“Mr. Darcy? What has happened?”

He felt uncouth yelling from afar, but he did not know anything about this new illness. “Several people fell to the ground in Lambton in the space of a minute with a rash. I do not know what the illness is, but I am taking all precautions.”

“I do not want anyone to come Pemberley with deliveries. They must place their deliveries outside. Everything from outside must be washed with soap and water. If anyone leaves, they cannot come back until the illness is gone from the county. Please tell Georgiana not to worry, that I am well but will isolate myself so that no one catches this.”

He continued to walk to the old lodge, wondering what illness had just arrived in Derbyshire. He could not remember one such as this nor having heard of its like before. He was quite parched and hoped the well outside the lodge still had the bucket.

A footman delivered a basket and threw pebbles at the lodge to let him know it was there. Mr. Darcy was careful to cover his mouth and nose with a scarf when he picked up the basket and took care to wash his hands after handling it.

“I bet I am just as fastidious as a surgeon!” Mr. Darcy muttered to himself.

Georgiana had sent a letter with the basket of food. She was scared and upset that her brother had abandoned her, though she understood he did not want to infect all of them. She could not understand that he might not yet have symptoms but develop them later. It hurt his heart, but knew he was doing what was best for all of them.

Elizabeth had been in Meryton with her sisters looking at the shop windows and passing time. They had just smiled and nodded to a well-dressed and handsome newcomer, one who had to be a wealthy gentleman with how fine his clothes were, when the first person collapsed in the street.

It was an elderly woman, and a good deal of townspeople rushed to help her stand up and pick up her purchases until one person screamed and ran.

At that, everyone looked more closely at the old woman and then scattered. She had bumps on her head with a bright vermillion rash. During the rush to get away, another person fell, a child of not more than two and ten. He too had a bright red face with bumps. Then another child fell down.

It was absolute pandemonium, with screams and accusations of witches, the French attacking, and curses. Elizabeth had backed up to a shop window with her mouth agape. Lydia was screaming and pulling at her hair. Jane wanted to rush to help, but Elizabeth held her back.

“Lydia, calm down and behave yourself.” Elizabeth turned to Jane, who still stared at the stricken children and looked up at the well-dressed gentleman whose name she did not know.

“I apologize for speaking to you, but in these circumstances I am sure we can forgo the rules. I am Mr. Bingley. Do you need my help traveling to your home? I could probably fit one on my horse with me—”

The offer was too late. Lydia and Kitty broke away running and screaming for Longbourn. Elizabeth sighed, as it would now be impossible to stop them before they made the entire house ill.

She turned back to Mr. Bingley, looking up at him on his horse. “I am sorry, but we need to catch my sisters before they reach home. But thank you.”

The gentleman’s eyes were focused on Jane, but he tipped his beaver hat and kicked his horse into a fast walk.

Elizabeth walked quickly until she was out of Meryton, and then she too started running. She had more strength and endurance than anyone else in her family, as she would often run when there was no one else about. She caught up to her sisters, who were bent over panting not far from Meryton.

“Kitty and Lydia, you should not have run out of town like that. You are the daughters of a gentleman.”

Lydia, still bent over with her hands on her legs, looked up at her sister. “This is no time for your lectures, Lizzy. We did not want to fall over and die, did we, Kitty?”

Elizabeth narrowed her eyes. Her younger sister was ever obstinate and never learned any lesson they tried to teach her. “Be that as it may, word will get out of how you two behaved. And we cannot go directly home, as we need to wash first so that we do not bring whatever it—”

Lydia stood upright with her usual disdainful countenance directed at Elizabeth. “Not go home? There is something killing people in Meryton! We have to warn them!”

Lydia and Kitty briskly walked on the path back towards Longbourn. When they were close, Kitty and Lydia ran the rest of the way, taking Elizabeth by surprise. She shook her head. Whatever the illness was, the entire house would have it now.

“Do you think the illness could spread that easily?” Jane asked. “Perhaps they all came in contact with the same sick animal?”

Jane was ever seeing the best in everyone, but today it only irritated Elizabeth. She pursed her lips and did not answer, as she could not think of anything to say.

They reached Longbourn just in time to see Lizzy and Kitty run out of the front door. “Hill is sick! She has the rash, and her skin is so hot!”

Deep unease ran through Elizabeth. It was too late. The illness was already here.

“Do you think this could be something from Napoleon?” Jane asked. “Could he be attacking with illnesses?”

Jane really did look quite frightened, which was why Elizabeth took pity on her. “I do not see how Napoleon could have captured an illness and brought it across the channel and this far into England without anyone seeing them. I do not think anybody knows how to do that, and I certainly do not believe our town in Hertfordshire would be one of the targets in a war.”

Elizabeth was gratified to see some tension leave Jane’s countenance.

They all walked inside Longbourn and provided what help they were able with Hill and calming Mrs. Bennet. She was sure they were all going to die and be thrown out of their house by the odious Mr. Collins. They were so busy putting cool cloths on Hill’s face and soothing their mother that no one thought of Mr. Bennet until supper. He was found collapsed on the floor of his study with a bright rash and bumps.

Bella Breen is the author of over 17 published novels.