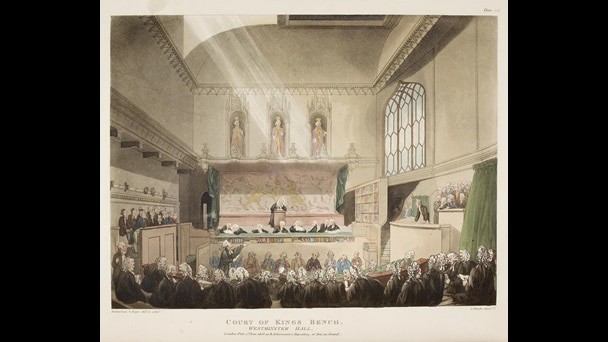 I have been researching the hell out of the court system in the Regency era. I need to have Mr. Collins in court but there are so many questions.  I’m compiling info here for anyone else that needs it.  Or is curious.

For more serious crimes such as rape or murder, cases were referred to Crown courts, who sat at quarterly assizes in large towns or at the Old Bailey in London. For the ordinary citizen, trials at these higher courts were hugely intimidating experiences. Courtrooms were sprinkled with herbs and scented flowers in order to prevent the spread of disease and to mask the smell of unwashed prisoners, while much of the courts’ daily business was conducted in Latin. Most felony cases did not involve defence barristers until the end of the century, and witnesses were usually examined directly by the judge and even by members of the jury. The vast majority of cases lasted for only a matter of minutes, and it was not uncommon for dozens of cases to be heard in a single day.
The 18th-century criminal justice system relied heavily on the existence of the ‘bloody code’. This was a list of the many crimes that were punishable by death – by 1800 this included well over 200 separate capital offences. Guilty verdicts in cases of murder, rape and treason – even lesser offences such as poaching, burglary and criminal damage – could all possibly end in a trip to the gallows. Though many people charged with capital crimes were either let off or received a lesser sentence, the hangman’s noose nevertheless loomed large.
Most punishments during the 18th-century were held in public. Executions were elaborate and shocking affairs, designed to act as a deterrent to those who watched. Until 1783 London executions took place at Tyburn eight times a year, where as many as 20 felons were sometimes hanged at the same time. Prisoners were transported to the gallows along a three-mile route by cart, often followed by a huge, jeering crowd numbering several thousand people. Prisoners were executed in front of these noisy, riotous audiences and many hangings resembled more of a fair than a solemn legal ceremony. Other hangings, by contrast, were sombre affairs, accompanied by deep mourning and widespread commiseration for the condemned. White doves were sometimes released by the spectators as a symbol of their sorrow, and executions were accompanied by a hushed silence as the frightening moment of death arrived.
Many felons were transported to the American colonies (and later in the century, to those in Australia), where they served out their sentences in hard labour. Other criminals convicted of lesser crimes were fined, branded on the hand by a hot iron, or shamed in front of the general public: by being whipped ‘at the cart’s tail’, for example, or being set in the pillory and pelted with rotten eggs and vegetables. Long-term prison sentences in ‘Houses of Correction’ were also more widely imposed towards the century’s end.

In London trials took place either at the Old Bailey, Guildhall (for crimes in The City) or Middlesex Sessions House.

For serious criminal and civil matters, the courts of assize or assizes as they were known were held in country towns. Visiting judges from higher London courts often presided over the assizes, a system that was created sometime in the 12th Century and largely abandoned by reform in 1971 (http://www.parliament.uk/about/living-heritage/transformingsociety/laworder/court/overview/assizes/).

Judges, normally in pairs, moved around circuits on royal commission (http://www1.somerset.gov.uk/archives/Leaflets/Assizes.pdf).
Cases were assigned to assizes by the Quarter Sessions, or periodic courts held in local jurisdictions by justices of the peace. These courts were traditionally held four set times a year, the days for hosting later called Epiphany, Easter, Midsummer, and Michaelmas.

The assizes typically were held two or three times a year, commencing with great ceremony (http://charlesdickenspage.com/glossary.html).

Counties in England in Wales were grouped in to circuits to hear assize cases; the circuits includes: Home, Norfolk and South-Eastern; Midland; Northern and North-Eastern; Oxford; Welsh including Chester; and Western (http://www.nationalarchives.gov.uk/help-with-your-research/research-guides/criminal-trials-assize-courts-1559-1971/#8-assize-circuits).

Court of assize had two types of juries, the grand and petit (or petty) jury. The grand jury, similarly to its contemporary use, was used to evaluate whether a case demonstrate sufficient evidence or merit to stand trial. Defendants were held silent during this process (http://vcp.e2bn.org/justice/page11440-juries.html). Petit juries were then made up of 12 jurors who evaluated evidence in the trial and decided on the innocence or guilt of a defendant.

Attorneys enrolled at Westminster were permitted to make arguments and advise clients in much the same manner as contemporary court proceedings (A Practical Guide to the Quarter Sessions, and Other Sessions of the Peace, 1829).
Based on the reports from the era, guilty parties from the assizes were either transported or hanged.

The Assizes were usually held two or three times a year, so that prisoners could wait months for their trial. In London serious crimes were tried at the Old Bailey.

It was rare for any member of the gentry and upper classes to be tried for theft. They were much more likely to buy off the prosecutor (victim of the theft) before their case came to trial, and if that failed, they had a much greater chance of being acquitted since they could afford to pay for lawyers or resort to bribery.

Assize trials gave an average of 30 minutes to each case, all formalities and swearings-in included.

Juries did not retire from the courts to decide their verdicts but huddled together for a few minutes to discuss the guilt or innocence of the prisoner.

The assizes were regularly preceded by a grand procession, attended by judges, lawyers, clergy and other public figures, and designed to display not only the power of the legislature but also the public place of its local protagonists.

Conviction for theft was heinous, apart from risking the death penalty or 14 years in a penal colony on the other side of the world, the social humiliation was devastating.

The death penalty was prescribed for petty theft, forgery and poaching, all crimes which threatened private property.

Theft of property worth more than a shilling was a capital offense. If found guilty, a person could be hanged, but more likely have been transported to Australia for 14 years.

Men were prosecuted with the reduced charge of assault with intent to rape, a misdemeanor.

More serious offenses that could not be dealt with at Quarter Sessions were held at Assizes Courts which were held two or three times a year.

A prosecutor served the British courts, but the accused was often only permitted a barrister’s advice for points of law.

Prior to the last decades of the 18th C, lawyers were rarely present in ordinary criminal trials. Most lawyers who appeared at Old Bailey in the 18th C were not top-notch legal minds. They were considered ignorant of the law and of general incivility.

This Circuit covered the counties of Essex, Hertfordshire, Kent, Surrey and Sussex.
London & Middlesex were dealt with separately.
1108 confirmed executions were recorded in the period, together with 64 possible ones.

The Assizes were always held at Hertford. From 1741 executions took place at Gallows Hill on the Ware Road leading out of Hertford.

Hertford is 3.5 miles from Longbourn/Meryton or 27 minutes of travel by private coach.

Assize
Courts were among the grandest buildings in a
town or city and would usually be located in the
area occupied by other government buildings.
Their massing would indicate that a grand public
hall and large courtrooms were located within
the building.

Assize Courts were usually presided over by
one of fifty-seven High Court judges though
Commissioners of Assize could be appointed
when a judge was unavailable,

1 thought on “Assizes Courts in the Regency Era”