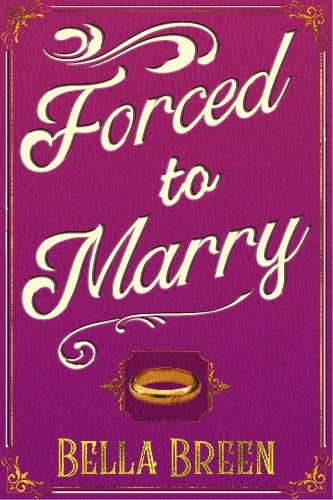 Elizabeth Bennet has just refused Mr. Darcy’s disastrous marriage proposal at Hunsford. Unfortunately, while strolling on the grounds of Rosing Park, Mr. Darcy and Elizabeth find themselves hopelessly compromised — in full view of Mr. Collins, Col. Fitzwilliam and two society mavens!
Now, Mr. Darcy and Elizabeth Bennet are forced to wed — even though they are still angry at each other. Will they learn to set aside their pride and get along? Or are they doomed to suffer the worst marriage in all of England?
Forced to Wed is a 53,000 word, standalone enemies to lovers novel with a guaranteed happily ever after.

“Forgive me for having taken up so much of your time and accept my best wishes for your health and happiness.” Mr. Darcy then walked out of the Collins’ Parsonage, slamming the door.

Elizabeth could not stand still and contain her anger at Mr. Darcy. How did he ever think anyone would be flattered by that? Especially after finding out from Col. Fitzwilliam that it was Mr. Darcy’s fault that Mr. Bingley left Netherfield suddenly and without proposing to Jane! “That insufferable man!”

Elizabeth was so angry she knew she would not be able to calm down unless she got out of the house and walked. She put on her Spencer and walking shoes, and took off for her favorite walk in Rosings Park. “There had better not be anybody that I run into today!”

The number of times that she had run into Mr. Darcy while he had been walking the very same grounds had been too many. Elizabeth now realized that had probably been his version of courting. “Only such an egotistical and prideful man would think that I had been walking in that area specifically for him to happen across me!”

She walked fast without seeing where she was going as she kept thinking back on what had just occurred with Mr. Darcy. The man who would always seem to dislike her, who did not want anything to do with her, who had even told Mr. Bingley that she was not handsome enough to tempt him. Why would he propose marriage? It was preposterous! And for him to be upset that she denied him? “As if I had somehow induced or incited him to think that I was interested!”

She could not wait to write Jane about this. Actually this was something that would probably have to be told in person, as it would take too much paper and ink to tell properly. How unexpected was that proposal!

And yet she could not tell Jane why she was so angry with Mr. Darcy—that he played a big part in ruining Jane’s chance for happiness with Mr. Bingley. How could she ever marry someone who had thwarted the love growing between Jane and Mr. Bingley? “Never!”

“Richard, where is Fitzwilliam? Did he tell you where he was going for his business errand? And what business does he have in Hunsford?”

Col. Fitzwilliam fussed with this jacket. He was not going to tell his aunt the reason Mr. Darcy left was to check on Miss Elizabeth’s health. His cousin had been quite concerned when they found out from Mr. Collins that Elizabeth Bennet stayed home. If Lady Catherine heard where Mr. Darcy had gone it would not be from him.

“He has been gone long enough. He comes to Rosings but once a year. I will not have him spend his time away. Go and find him, Richard. Tell him I want to speak with him.”

Col. Fitzwilliam bowed to the room and left. He was glad to leave, as he had been tired of listening to Mr. Collins talk about himself or admire anything his aunt said. How he could stand that level of flattery and obsequiousness was beyond him.

Col. Fitzwilliam would walk the path to the Collins Parsonage and expected to find Mr. Darcy on the grounds of Rosings Park. He could give Fitzwilliam a warning about their aunt’s mood.

“Yes, yes, but I am exceedingly displeased.”

“If I may suggest a new topic, Lady Catherine de Bourgh, the book that you recommended—The Spiritual Readings of an Enlightened Mind—has arrived. I should very much like to read parts of it to you as I have found—”

“It has arrived you say? Yes, do go and bring it here. I should very much like to see it.”

Mr. Collins popped up from the sofa, bowed, and backed away until he could leave the room without turning his back on his patroness.

Mrs. Collins lowered her eyes, embarrassed at her husband’s obvious fawning. The only person in England who should be treated as such was the King of England. No one’s back could ever be turned to him as they left his presence; however, her husband thought that the same should be done to Lady Catherine.

“This is so vexing.”

Mrs. Collins was grateful that her friend Elizabeth was not present with the mood Lady Catherine was in. With Elizabeth’s outspokenness and Lady Catherine de Bourgh’s bad mood, who know what could happen.

Mr. Darcy walked one of his favorite routes on the grounds of Rosings Park. He could not go back inside the house immediately as he was much too upset. How dare she think that he had ruined George Wickham’s life? Would he never get rid of that lying millstone around his neck? He would have to write Elizabeth a letter. It was not possible to speak to her with any measure of civility after he proposed to her. And he had thought the offer of his hand would be greeted with favor! To not only be turned down, but in such a manner as to insult him! No, he had not expected that.

Mr. Darcy continued to walk through the grounds of Rosings Park without seeing where he was going, reliving that horrible moment in the Collins Parsonage over and over.

Mr. Collins reached the parsonage in record time. He picked up the new book off his desk and then also picked up the sermon he had written for Sunday’s service. He was sure Lady Catherine de Bourgh would admire his brilliant turn of phrase. He gathered both and left to walk back to Rosings Park. He had not spared one thought to his cousin Elizabeth, who should have been in the house suffering from a headache.

He was thinking so much of how Lady Catherine would admire his sermon that he failed to notice the village women walking on a path towards him.

“Oh, Mr. Collins. There you are. We had hoped to find you today. We have some questions and thoughts regarding—”

Mr. Collins stopped. “Good day, ladies. I am on my way back to Rosings Park as Lady Catherine de Bourgh had sent me on an errand to fetch a new book of spiritual readings. I must hurry back to her, you see. I do not have time to tarry.”

The village woman would not be so easily put off as that. Though they did not have the wealth of Lady Catherine de Bourgh nor the elevated status of being the daughters of an earl, they were both married to wealthy landowners, one of whom had a daughter getting married soon. They understood Mr. Collins needed to get back to his patroness, especially if she was waiting for him. They were therefore willing to accompany him on his walk through the grounds to Rosings Park while they talked to him about the upcoming wedding.

Elizabeth had been walking on the grounds of Rosings Park replaying over and over the scene that had occurred in the Collins Parsonage between her and Mr. Darcy. She felt a little regret regarding what she said to Mr. Darcy. However, after remembering that he had disparaged her relations to her face, she stomped down on her remorse. “What a nodcock!”

She was so inwardly focused that she missed the large tree root in front of her, which she tripped over. She tumbled and finally landed on her front with her dress up almost to her shoulders. She had attempted to brace herself during the fall but now her hands hurt too much to push herself off the ground. She turned her hands over to see her palms scratched and bleeding.

“And now this! This has to go down as one of the worst days of my life.” Elizabeth tried to get up on all fours without actually using her hands. She was therefore in quite an awkward position with her rump high in the air, her dress still up near her shoulders, and her chemise completely exposed when she heard a gasp.

Elizabeth looked up to see a pair of highly polished Hessian boots along with a long greatcoat. She followed the legs up to the countenance she knew quite well, having just seen it not long ago. It was Mr. Darcy. 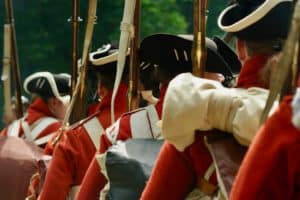 Chapter 1 of Forced to Marry

“Forgive me for having taken up so much of your time and accept my best wishes for your health and happiness.” Mr. Darcy then walked out of the Collins’ Parsonage slamming the door. Oh, that insufferable man! To think that he could have made his proposal in any manner that she would have accepted. For him to think that she would have accepted his proposal after he told her how inferior her connections were! “Arrogant,

Chapter 2 of Forced to Marry

Elizabeth blanched and looked back down at her bleeding palms. She was completely mortified and humiliated. Not just for being sprawled on the ground with her dress up and chemise exposed, but for being found by the man whose proposal she had just turned down. She struggled even more to push herself up with her wrists. “Miss Elizabeth, you are injured. Let me help you up.” There was no way she was going to allow 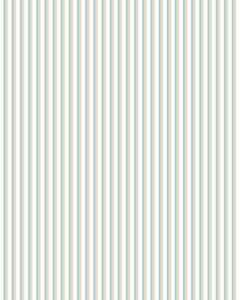 Chapter 3 of Forced to Marry

The Collins’ maid helped Elizabeth upstairs to her bedchamber. It was not too difficult as she could brace herself on the walls and hop up the steps. The maid returned with a bowl of water, towels and liniment. “Oh my! Your hands look painful. Whatever happened?” Elizabeth had planned on keeping that quiet, but now that village women, Mr. Collins and Col. Fitzwilliam had seen her, she doubted anything would be kept quiet. Especially by