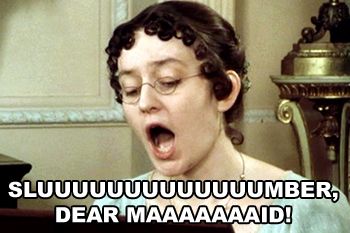 I’ve been wandering around the inside of my site and ran across a plugin that kept track of some of the keywords people used to find this site. Some of them because Google won’t share like 93% of the keywords.

Anyway, some of these are funny and some are so interesting I want to find the story myself so I can read it.

“fanfic a servant at netherfield puts darcy in elisabeths room” Is there a story with this? Does anyone know what it’s called? I’d like to read that. I might have to write something based on this.

EDIT: This has been identified as A Most Convenient Mishap by Rebecca E. Thank you Cynthia Leong!

“pride and prejudice fanfic mr darcy despair” Why is he in despair? Does the story end happily? What story is this?

“pride and prejudice fanfiction elizabeth missing” This would be interesting to read. Was she abducted by Wickham? Held for ransom to get back at Mr. Darcy?

EDIT: This has been identified as Mr. Darcy’s Stolen Love by Harriet Knowles, To Find Elizabeth Bennet by Melanie Schertz. Thank you Cynthia Leong!

“lydia almost ruins darcy and lizzy getting married fan fic” You could say that Lydia did this in the original P and P. But is there a fanfic where this happens right before or during the wedding? That would be interesting to read.

“darcy is temporarily poor fan fiction” I’m surprised by this one. I don’t think anyone wants to read about Darcy being poor. Unless it’s one where he gets his money back quickly and Elizabeth was the only one that treated him well.

“who does elizabeth see hugging darcy at his estate pride and prejudice” Now this would be an entertaining read. Are Elizabeth and Darcy married at this point? Does it cause Elizabeth to be jealous and try to find out who the woman is? What problems does it cause? Anyone know this fic?

“darcy is forced to marry elizabeth and leaves her at pemberly” This would be interesting to read. What does Elizabeth do? Does she travel to London? Will the servants at Pemberley help her or does she run off to confront him? I’d like to read this.

EDIT: Identified as A Life Apart by Harriet Knowles. Thank you Cynthia Leong!

“novel in which mr darcy takes eluzabeth’s hand and put it on his lap at the theatre” Ok now, someone has to know this fic. What is it? I’ve been searching for it after seeing this keyword and I want to read it!

EDIT: This has been identified as The Truth about Mr. Darcy by Susan Adriani. Thank you Cynthia Leong!

2 thoughts on “Interesting keywords used to find my site”