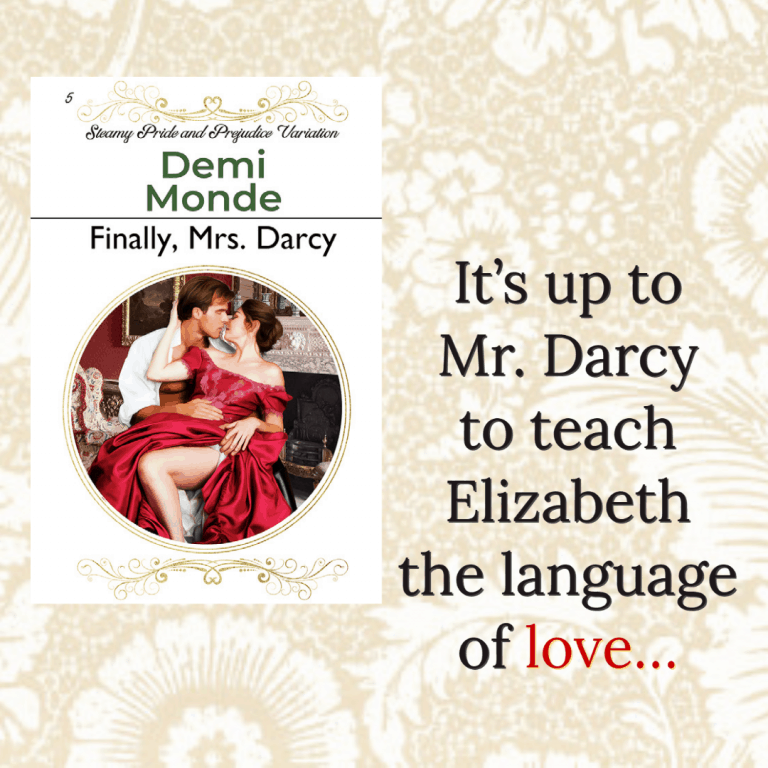 Elizabeth could barely keep herself calm walking next to Mr. Darcy as they followed the newly betrothed, Jane and Mr. Bingley. This was the first time she had been able to converse with Mr. Darcy in private since she had last seen him at Lambton, the scene of the horrid news from Longbourn in the form of letters from her sister, Jane.

She could not believe she was even the same person. They had been so wrong about Mr. Wickham and Mr. Darcy. One had all the appearance of a gentleman, the other all the manners of one. Then she had heard from Lydia that Mr. Darcy had witnessed Lydia’s wedding to Wickham, and Elizabeth had had to write her aunt Mrs. Gardiner to hear why Mr. Darcy was at the wedding of a man who tried to ruin Mr. Darcy’s sister. Wickham, who had tried to elope with Georgiana Darcy, would have had his revenge completed had he succeeded.

Through Mrs. Gardiner, she had heard of everything Mr. Darcy had done for the Bennet family by orchestrating the wedding between Mr. Wickham and Lydia. She needed to thank him. She knew not what he thought of her, but she needed to speak.

“Mr. Darcy, I must thank you for all that you did for my family regarding my younger sister and Mr. Wickham. I know how you feel about him, which makes your actions even more gracious and generous. From finding him in London to arranging the wedding—”

“Please, Miss Bennet, I only did what I could have prevented had I made Mr. Wickham’s character known. I do not want to give you pain, but I thought only of yourself with my actions, Miss Bennet.” He paused, which gave Elizabeth time to ponder what he meant. “Miss Bennet, you are too kind. If your feelings have not changed since the last time I broached the question, please let me know, and I will forever stay silent on the subject, as my feelings have not changed.”

Elizabeth could barely believe what she had heard. Did he just say that his feelings had not changed? Did he still care for her?

“My feelings, Mr. Darcy, have undergone such a significant change that I would venture to say they are the exact opposite of what they were last Spring.”

She chanced a glance at him under her lashes and was gratified to see that her words had an effect. He beamed. Elizabeth was not sure she had ever seen him smile so broadly. He had smiled at her in Pemberley when she had turned the pages for his sister as she played the piano. But that was a small smile. This was a grin.

“You have done me a great honor, Miss Bennet. I had hoped as I never had before when my aunt, Lady Catherine, came to me at Pemberley to inform me of your conversation at Longbourn.”

Elizabeth barked out a laugh. “Indeed, if I could abuse you to your face, certainly I would have abused you to your relations if I had been inclined.”

Mr. Darcy glanced at her, joy still evident in his expression. “I knew enough of your character to know that you would have shared what you thought immediately and without reservation. The fact that you did not gave me hope.”

“I hope my answer was satisfactory, then.”

He stopped and approached, taking her hands in his. “Everything you do is satisfactory to me, Miss Bennet. Or may I call you Elizabeth now that you have honored me by becoming my betrothed?”

She had not known she could smile so widely that her cheeks hurt. Elizabeth could float over the fields and trees, she was so happy.

Mr. Darcy glanced up the lane at Jane and Mr. Bingley walking further away, then back at her with a gleam in his eye. He leaned down and placed his lips upon hers.

Finally, her first kiss. Never at that first assembly would she have thought she would have fallen in love with him, but she had, deeply and completely. He was a man, he had faults, but she loved him so much.

He pressed his lips firmly against hers and moved them, tilting his head to deepen the kiss. He placed his hands on her arms. She grabbed at his coat as he ran his hands down her arms and sides. The heat of his hands on her body was so indecent.

Then Mr. Darcy trailed the tips of his fingers lower, over her buttocks. She stilled in shock and gasped.

Mr. Darcy stood back from the kiss with a smirk.

She had not expected this of him. He was the perfect gentleman, yet he had just grazed her bottom with his hand in broad daylight.

“If you will forgive me, I could not help myself. You are the most beautiful woman I have ever known. I have shocked you. I apologize. I was overcome.”

“That does not mean that the surprise was not wanted.”

The smile reappeared on his features. He looked up the lane at the backs of the other betrothed couple which were farther away. Then he held out an arm to the copse of trees in the nearby field.

“Let us go there, sit down and talk.”

Elizabeth swallowed her laugh. She knew quite well they were not going to talk. She wanted to experience more of those kisses and his hands on her body.

They walked across the lane onto the field with new crop growth to the little copse of trees. It was a beautiful spring day. Mr. Darcy took off his greatcoat and laid it down on the ground. They both sat on it, close together as the coat was not that wide, and leaned back against a tree.

She looked up at the sky with a few white clouds against a beautiful cerulean background. It was the most beautiful day, and she would never forget it, for Mr. Darcy had still loved her! She was so full of happiness.

She turned to him, his face a few inches away. She could see that his eyes were not completely brown.

“I have longed for this moment. Ever since I first saw you at that assembly in Meryton, I have been bewitched by you, body and soul. You have captured me.”

Elizabeth blushed and looked down, which was quite unlike her.

Mr. Darcy placed two fingers under her chin and raised her face. Then he leaned in, closing his eyes. She knew what would happen next and closed her eyes, trying and failing to not smile at more kisses from Mr. Darcy, her betrothed.

His lips touched hers, sending sparks throughout her body. He pulled her closer to sit on his legs. It was a pleasurable way to pass the time. She could see now what the attraction was. His kisses were amazing and combined with the light touches of his hands trailing down her back were even more exciting.

She squirmed. The overwhelming urge for him to touch her nearly overrode her sensibilities. Elizabeth knew they could not. Besides, they were in a field in broad daylight.

But, oh her body wanted.

READ THE REST OF THE STORY NOW