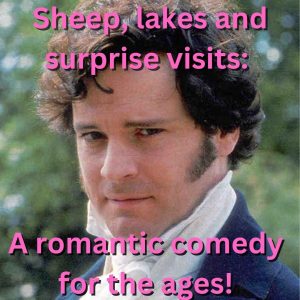 https://geni.us/sheepish
Things look baaaaad for our dear couple when Elizabeth and the Gardiners visit Pemberley…
Elizabeth Bennet is touring the Peak District with her aunt and uncle, Mr. and Mrs. Gardiner. Little do they know that as they make their way to Pemberley, fate has other plans for them.
When Elizabeth arrives, she finds herself admiring the lake when a wet Mr. Darcy, having been knocked in the water by a sheep, stumbles across her. But the chaos isn’t over yet, as Elizabeth is holding in her laughter, a sheep knocks her into the lake. Mr. and Mrs. Gardiner arrive just in time to see Elizabeth being fished from the lake by Mr. Darcy, leaving them both embarrassed and forcing them to marry.
As Mr. Darcy courts Elizabeth, old foes try to keep them apart and the sheep have more to say as well. But no matter how hard they try, nothing can stop Mr. Darcy and Elizabeth from falling in love. The culprit behind the constant interference is revealed and with a happily ever after, all’s wool that ends wool!
Mr. Darcynew releasepride and prejudice variationsheep